My name is Rahn. Way back around 2008, when I started this site, I created it as a place to track local adventures and outings we did. I was a big runner at the time, so most of the content had to do with races and group runs I did with the local running shop. (Runners Fit in Braselton, GA.)

Since then, I’ve stopped running and moved, so the site has changed direction. It’s still about adventures and trips, but now it’s going to talk about role playing games and trips of the mental variety, with the occassion real world excursion thrown in. At least, when the real world allows that to start happening again.

Role Playing in the 80’s

I’ll happily admit it. I was a nerd growing up, playing a whole lot of Dungeons & Dragons.

Back in the mid-eigthies, I played with a group of friends at the local park. I don’t recall how we actually got the space, but the park administration made us an official group, The Studio City Gaming Club, and gave us a spare closet to play in. It really was the supply closet, with stacks of folding chairs and tables that we had to move out of the way to make space. We made it into the park program guide, which helped people find us and come play. I remember one time a group of old ladies excitedly showed up hoping to play some bridge, but it was just us teenagers. Another time we saw William Shatner, but we gave him his space to play instead of being the big Captain Kirk fans and running up to him.

While we started out with AD&D (that’s what the version was back then), we eventually switched to Villians & Vigilantes. In that game, we were all comic superhero’s fighting all the comic baddies. We also went to several local conventions as a club. I forget the names, but I think there was a Dragon Con, and maybe another that started with a G. Either way, they were 3 days weekends with almost no sleep except where we passe out in the halls or the one room we all chipped in to share. But fun weekends filled with gaming.

Our members that I recall were: Dana L, Phil P, Richard P, Michael S, Gary V, Amanda, John S, Chris. Some other people I played with at the time were Mark D and Darin L, but I don’t recall if they were from this group or school. Darin is now a well know table top wargame designer in his spare time. I recently connected with Phil, not sure if he’d remember be, and he instant knew not only who I was, but also my character. (Stargazer, whose primary ability was astral projection and mind reading.) There was another fellow in the group who was a real good artist. He did amazing pictures of all of our hero’s. Unfortunately, I can’t remember his name nor can I find the picture of Stargazer that he did. :(

Another group I played with from High School was: [front row, L-R] Dana L, Rob H, Dave F, John, [backrow] ed(?), Dave W(?), Zennon. Kevin B was also in the group, but not here for the picture. These were the last guys I gamed with before heading off to the Army. Rob was our DM, and we were doing AD&D. Here’s a picture of us with awesome 80’s hair. As is often the case, I was taking the picture so not in it. 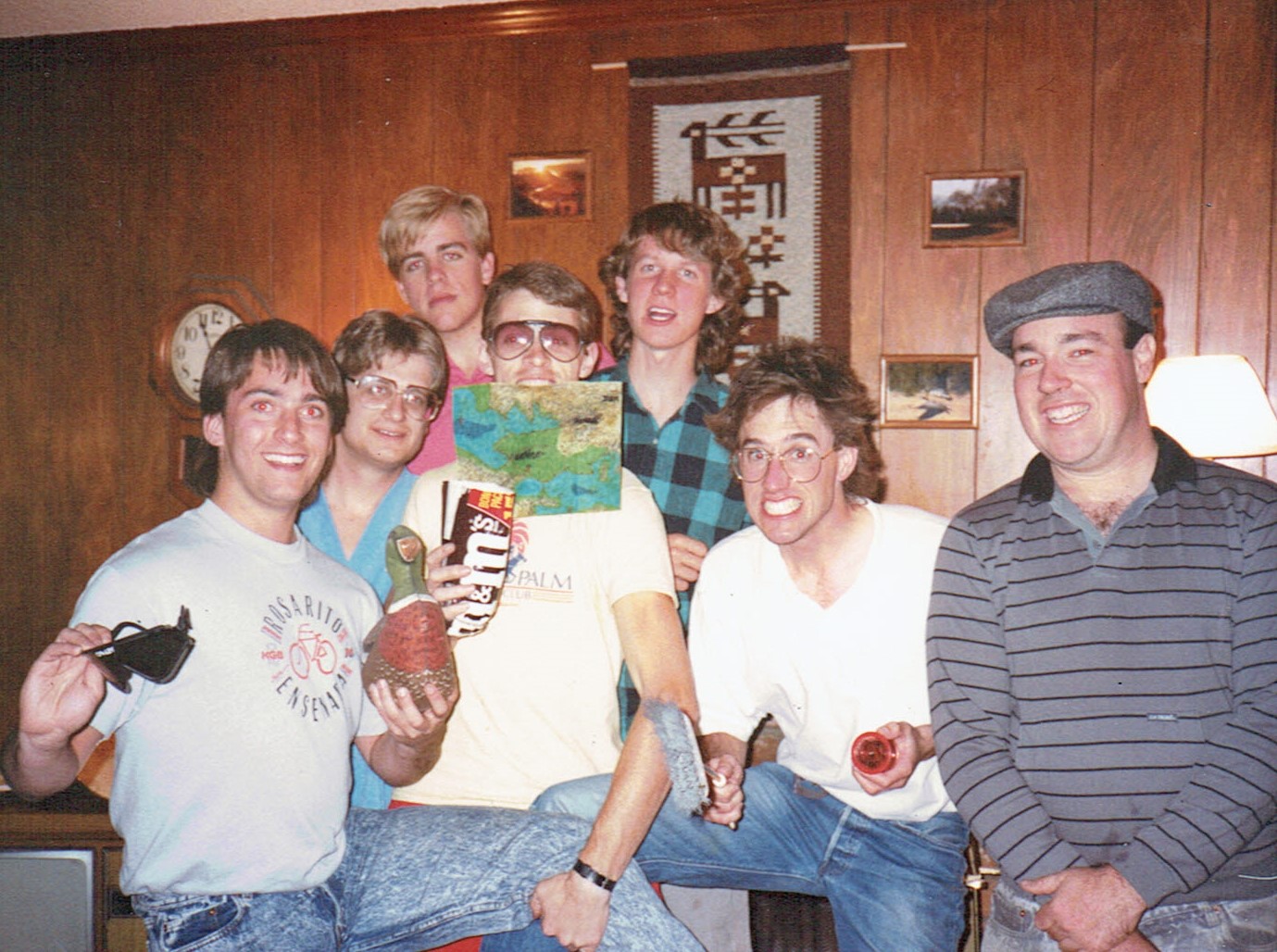 While in the army, circa 1989, I had one memorable game. A group of us played outside on a warm day during off hours, from our observation post on the DMZ. We had communist North Korea in the background. Somewhere I have a picture of this game.

Over the last few years, I’ve been waiting for my kids to get old enough to be interested in playing. This day finally arrived at the end of 2020, and now I’ve started DMing a group of 4-6th graders. Their parents and other friends are thrilled with this, so I’m also in the process of starting an adult game.

I can’t wait to see where this takes us.

If anyone from these old groups pops up hear, would love to hear some updates on where you are and any details I missed above.

This site is based off Memoirs Jekyll Theme by WowThemes.net.

Site logo is a map compass, drawn by Max, age 9.

[Note: I’ve switched how the site is hosted. As a result, I’ve archived all the old posts and will decide which ones to convert to the new site. If you’re looking for old content, let me know what you are trying to find, and I’ll try to pull it up.]